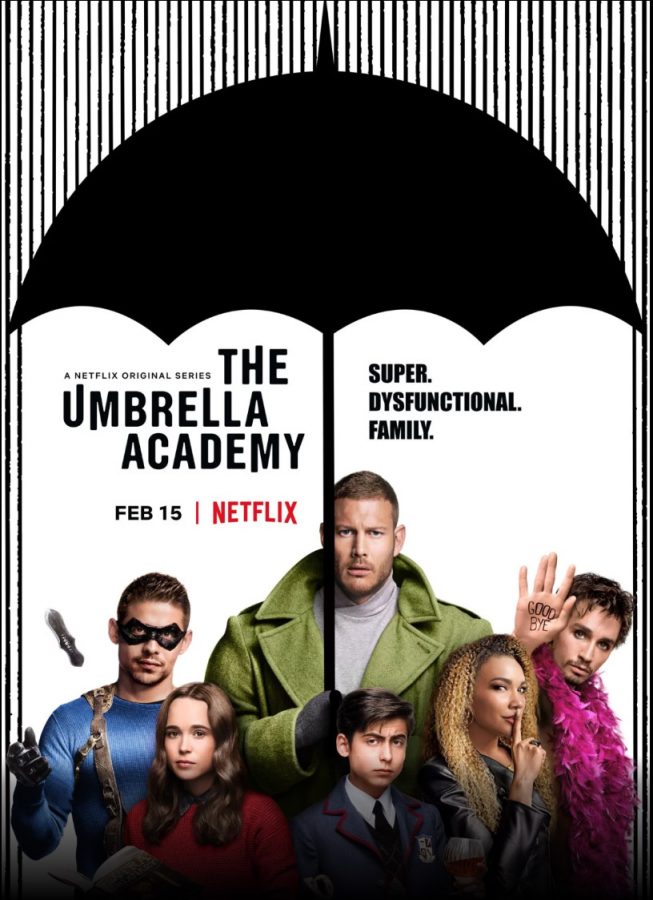 The Umbrella Academy is not the typical kids-with-superpowers-save-the-world kind of show. It is a show that will make you cry, laugh and scream at the TV saying, “run for your life!” as if they can hear you. It will leave you sad that it is over so quickly.

One day in October 1989 there were 43 infants born all across the world to women who had no signs of pregnancy that day. Seven were adopted by billionaire Sir Reginald Hargreeves, who then created The Umbrella Academy: a training academy to strengthen the seven children’s special abilities to enable them to save the world.

Due to stress on the “family,” The Umbrella Academy disbanded when the children became teenagers. Years later, upon hearing the news of Sir Hargreeves’ passing, the surviving six members of The Umbrella Academy – Luther, Diego, Allison, Klaus, Vanya and Number 5 – return to their childhood home to investigate their father’s death.

The divided family’s personalities and personal agendas begin to clash, causing disarray in their plans. Did I mention they are also trying to stop the apocalypse?

The Umbrella Academy was made known of the impending apocalypse by their brother, Number 5, who had been missing for several years. Number 5 had traveled to the future using his special ability, and ended up stuck there. He had traveled into the result of the apocalypse, and used his years stuck there trying to figure out how it happened.

He eventually finds his way back to his family, eight days before the apocalypse is supposed to happen, and enlists them to help him stop it. What he doesn’t know is that, inadvertently, he brought with him people from the future who are there to make sure that the apocalypse does happen.

The Umbrella Academy was first a comic book series from Dark Horse Comics written by Gerard Way, which some may know as the lead singer of My Chemical Romance. The series was then created as a Netflix Original by creator Jeremy Slater and showrunner Steve Blackman. Slater is known for his work on Fantastic 4 (2015) and Death Note (2017).

The show’s plot is well developed and complex, yet it is not confusing. In other shows with time travel, it can get confusing. Where are they? When are they? When they go back do they remember what they saw in the future? These kinds of questions are answered every time there is a time jump in The Umbrella Academy.

I also like that there are not many unnecessary plot twists. Everything that happens in the plot makes sense. Although some points are shocking (and believe me there are quite a few of them), they are all purposeful in moving the plot along.

The actors chosen for the roles in this show are amazing. There are not many shows I can say this about, but I would not trade any of the actors for different ones. These actors really embodied their characters, their personalities, personal struggles and what it would be like to have the background these characters do. Their performances evoke emotions from the audience, with is hard to do.

This show is a must-watch show. The plot is wonderful, there are amazing actors, the CGI is realistic and, most of all, it has one of the best soundtracks I have heard in a long time.