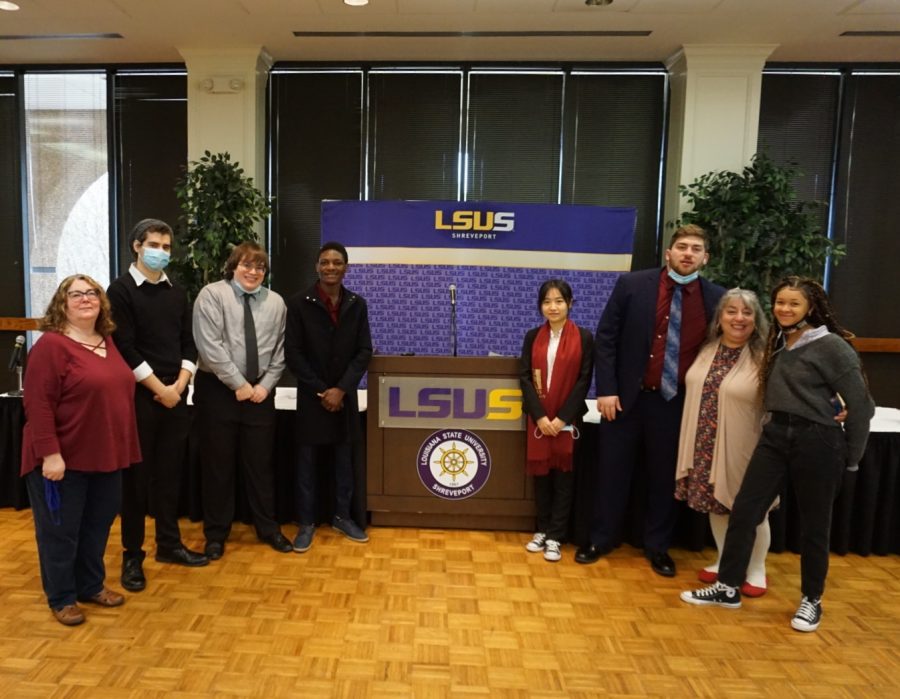 “World War II hit and there wasn’t money and students were, at the time, I think a little bit more interested in theater than they were in speech and debate,” says Park’s Speech and Debate team coach Lora Cohn, Ph.D.

In 2017, the Speech and Debate team was reinstated at the Parkville campus for the first time since the 1940s. Cohn, who is also an associate professor of communication, was the driving force behind the return of this organization.

Her request in past years for travel money and a graduate assistant had been turned down. According to Cohn, upon his arrival in 2016, former President Greg Gunderson, Ph.D., agreed that without a speech and debate team, students were not developing their critical reasoning skills as much as they could.

“We started with the club and just did debates on campus in the spring, and then in the fall we had a full budget,” Cohn recalls.

In the four years the team has been active again, this is the first year they have had a graduate assistant.

The position is filled by communication and leadership graduate student Janine Wilkins. She has many duties including high school recruitment, managing the team’s Instagram account, supplying materials to members and providing one-on-one coaching to assist and improve the members’ performance. This is not Wilkins’ first experience with speech and debate.

When she was in high school in Advanced Placement English, she had the opportunity to participate in a speech contest. After winning, a teacher invited Wilkins to deliver her speech at the American Legion Oratorical Contest. Wilkins recalled the other entries blew hers out of the water, but she was not discouraged in any way. In fact, she enjoyed the experience.

She ended up attending St. John’s University on a debate scholarship. Since then, she has coached speech and debate at the elementary and high school levels for 13 years, including her son, Adam Wilkins, who is a first-year member on Park’s team.

There are seven active members that make up the team. The group is considered a comprehensive team, meaning they compete in debate and individual speech events. They participate in nine to 10 tournaments a semester: some virtual and some in-person requiring travel.

Cohn notes the virtual format allows the team to do more International Public Debate Association or IPDA tournaments. These debates focus less on reading a lot of evidentiary pieces and talking fast and more on critical thinking.

“Our students, and I think a lot of young people today, don’t have the kind of time to put into the research of some other forms of debate. And so, this is a good compromise,” says Cohn.

She wants students to understand that speech and debate is for anyone and everyone. Cohn believes that although most think public speaking is not their strength, it often is and they just do not know it yet.

“That’s the thing I think is special about the team. You get to explore things that you normally wouldn’t and try new things out. Everything that doesn’t kill you makes you stronger, is my philosophy,” says Cohn.

Senior business administration major and third-year member of the team Michael Willis strongly agrees with that philosophy. He participated in speech and debate in high school and said he wants to continue to force himself to be uncomfortable.

“Honestly, I have a sort of special fear for public speaking, but I still think it’s an important enough skill to improve and to get good at,” says Willis. “The benefit is improvement, it’s knowledge, it’s an improvement of one’s personal skills. Public speaking is not something you can avoid in this day and age,” he notes.

Throughout his time on the team, Willis has learned how to present himself. Even more important to him, he learned how to express his ideas and think about them critically. This encompasses finding faults in his own arguments as well as others. In the end, Willis believes this shapes him into a more educated and well-rounded individual.

Like Willis, sophomore nursing major and first year member Adam Wilkins has realized speech and debate provides people with the ability to look at multiple perspectives and truly put themselves in someone else’s shoes. He is very thankful that Park has brought back the Speech and Debate team.

“Just having a team means this is a school that values public speaking, reading, writing and skills that are really necessary for really any career you go into,” he says.

Cohn’s goal for anyone involved in speech and debate is constant improvement. She wants students to develop their skills to the level that she knows they can. This includes improving critical thinking as well as becoming more articulate with ideas when they communicate.

Cohn encourages all students to join the team, even those who may not have the time to travel to tournaments but would like to practice and improve their skills. It is not required for members to compete.

Park Speech and Debate meets on Thursdays at 1:30 p.m. in Copley-Thaw 300. Anyone is welcome to join these meetings. For more information, email Lora Cohn at [email protected]