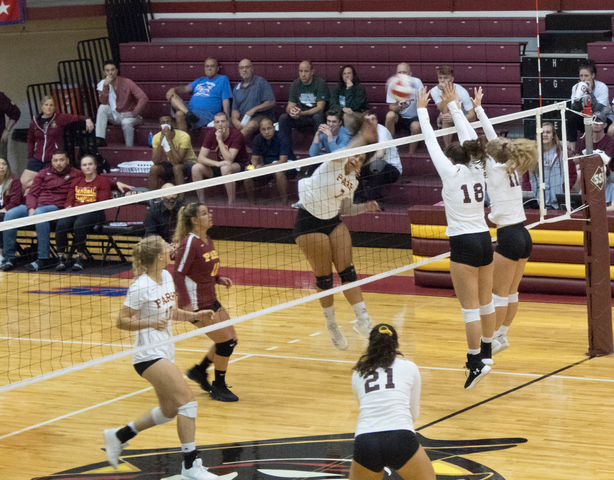 Noura Meawad, junior right side hitter, spikes the ball with senior libero Celina Monteiro and senior middle back Maren Roper to the left.

In the first set the Pirates took an early lead, quickly gaining two points on the young Buccaneers team. The Buccaneers earned one point, but that potential moment was quickly squashed as the Pirates earned five more points without an answer from the Buccaneers.

In the middle of the set the Buccaneers fought back, but in the end it wasn’t enough. The set ended 25-16, Pirates.

The Pirates jumped out of the gate hard in the second set, scoring seven points without an answer from the Buccaneers. This was a steep hill that the Buccaneers couldn’t climb over. The second set ended 25-16, Pirates. Set three also ended with a score of 25-16 in favor of the Pirates.

Maren Roper, senior middle back and right-side hitter, was a starter for this Park versus Park match up. She said it was friendlier than an average college volleyball match.

“We went to dinner together the other night together,” said Roper. “They look so young. I think all of our players are older, and they’re all new freshman, so they look like little babies. It’ll be cool to see how they develop over the next few years.”

“I thought they did a great job for being a first-year program,” said Michael Talamantes, head coach for the Pirates. “If they want to come down and keep playing us, we’d love to.”